Why Asperger’s Hasn’t Existed since May 2013

Yes the title sounds odd. Having talked previously about getting an official diagnosis, we are now saying it has gone away. However things are not quite that simple. It simply got reclassified into something else (at least for official purposes). Let me explain: DSM version 5 (DSM-V) was modified to remove the diagnosis of Asperger’s and reclassify those showing those symptoms under the general Autism Spectrum umbrella. The DSM is the d facto tool most doctors use to diagnose individuals, based on their characteristics. The decision to move Asperger’s was based on their belief that it would better serve people on the Autism Spectrum.

The problem with this move is that there are people who hadbeen previously diagnosed with Asperger’s under DSM-IV but could no longer qualify for a diagnosis under the Autism Spectrum umbrella This caused a lot of anger for many people in the Asperger’s community. They felt the move would make them unrepresented and that they’d simply be absorbed wholesale into the new classification. 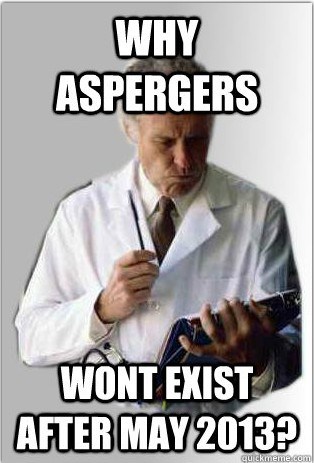 There is growing evidence that Asperger’s is different to Autism in terms of brain connectivity. In response to the DSM reclassification, there was a research study carried out by Frank Duffy, M.D. He used electroencephalography (EEG) recordings to measure the amount of signalling occurring between brain areas. His findings were that “The ASP population appears to constitute a neurophysiologically identifiable, normally distributed entity within the higher functioning tail of the ASD population distribution.” You can read more details about the study at: http://www.biomedcentral.com/1741-7015/11/175.

Alongside these differences, there are also other differences, such as developmental delays that only become apparent in children with Asperger’s as they get older. They typically do not experience the same language delays as children with other elements of Autism Spectrum Disorders.

Some estimates suggest that one third of people who would have previously qualified for a diagnosis of either Autism or Asperger’s will no longer fit into either diagnosis category as a result of reclassification. This then has implications for the level of support and insurance based services that would have been previously been available to that individual.

Personally, I find the reclassification trend disturbing. However, the good news is that the European diagnostic classification (the ICD framework) does continue to recognise Asperger’s as a separate subgroup.

My hope is that as awareness of the issue is raised, the reclassification will be reversed in the next version of the DSM.

Anyway, we’d love to know what you think, good or bad. Please leave us a comment below