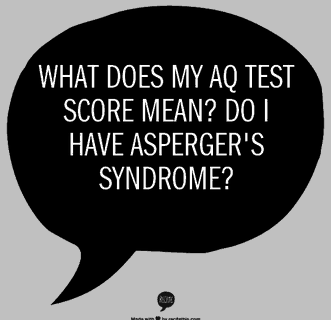 For those of you have taken the AQ / Autism Test, you are probably wondering what the results mean.

While you’re interpreting the results, please bear in mind that the scores of the AQ test are based on statistical analysis of people with Autism who have taken the test and while it isn’t an exact science it does give an indication of ones level of autistic tendencies.

In terms of the distribution of the scores of the general population, it can be said that getting a score of:

When the AQ test was initially released the official score for having Asperger’s was 26 and this could provide effective diagnosis to 86% of the participants. However there were also a small percentage of people who scored 26 who would not classify for a more formal diagnosis of Asperger’s Syndrome. Because of this a score of 32 was introduced to reduce false positives in diagnosis and to make the test more suitable for the general population.

We often get asked what a low score on the AQ means and what we can say is that this indicates a low level of autistic tendencies.

One thing to note is that that the symptoms of Aspergers and High Functioning Autism occur differently in men, some people have commented that this test is slightly less accurate for women. Generally it can be said is the women with AS or HFA score higher on this score than men.

For more information about the test itself and particular statistics, you may find the following paper useful  Screening adults for Asperger Syndrome Using the AQ Test

Please bear in mind that this AQ Test is only a tool that can be helpful in self diagnosis. The test gradings are based on statistical analysis so professional medical advice should be requested following higher test results of 32 or more. More information can be gained by signing up for our free course. You will receive the essential information you need to know.

If you are a parent looking for more information about your child, we can highly recommend that you check out the Early signs of Autism in children . For adults, check out our blog posts about resources for adults with Aspergers.

There are also a number of good posts on our site which act as helpful resources for those looking for more information. Use the search box at the top of the page or search by category on the right hand side.