What is Aspergers Syndrome?

This is a question that seems to be asked increasingly in our modern society. From engineers and computer programmers to quantum physicists, the highly intelligent but socially awkward populations of society are eventually beginning to find answers to the question they have always been busy with – “why am I different”.

Tragically the people that are asking the question are often people that should have been diagnosed with the condition earlier in life, due to failures in the health and education system. It is only now that famous celebrities are coming out that Asperger’s Syndrome is now in vogue.

According to medical sources, it is listed as a behavioral disorder, but there is much more to it than that. It can be described as a ‘hidden disability’ meaning that you cannot recognise the condition from any outward appearance[1]

Asperger’s has many behavioural signifiers, including difficulties in the three main areas of social communication, social interaction and social imagination. For example, subtleties in difference in tone of voice and facial expression, jokes, sarcasm, non-literal meanings and metaphors can be misunderstood, which often manifests as a perceptible social awkwardness. This can create difficulties in maintaining conventional friendships and relationships; Behaviour may sometimes appear to others as clumsy or inappropriate due to an inability to read “between the lines” and adhere to “unwritten” social conventions.The most notable and dysfunctional characteristic of Asperger’s is a lack of demonstrative empathy, which brings with it a lack of emotional and social reciprocity.[5] This in turn can often lead to other problems such as feelings of isolation or depression or a strong belief within an individual that they somehow don’t “fit in”. 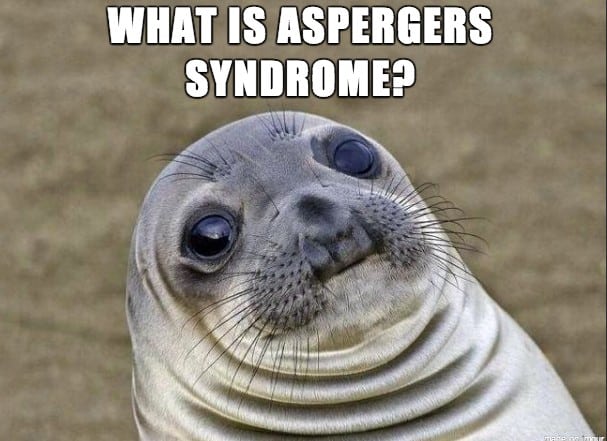 Another characteristic often associated with Asperger’s is a difficulty to imagine different future outcomes to set events and a tendency to repeat a set pattern or patterns of behaviour leading to a narrow or limited pursuit of rigid interests, such as an interest in numbers or specific details[6]. In children, this characteristic can manifest as a difficulty to engage in “let’s pretend” games, and a preference instead for games involving logic or systems, for example a child with Asperger’s may avoid the dressing up box but excel at maths or logic problems.

Technically Asperger’s Syndrome is classified as a type of Autism Spectrum Disorder, but for readers of this blog and our email course you will understand that there is some debate about how similar it actually is to Autism. People with the syndrome are often highly functioning and are able to cope and succeed in the world unlike other people on the Autism Spectrum.

The brains of people with Asperger’s, are fundamentally wired differently. Instead of thinking in language like most people do, one is more likely to think in pictures if one has the syndrome.

In reality what this means is an entirely different way of thinking about the world around them. Extremely intelligent people who in layman’s terms can  do some of the most complicated tasks and find solutions to difficult problems.

The downside of course is that dealing with social becomes very difficult. When one thinks differently to the norm, it is very difficult to identify and communicate with others. Things that most people take for granted in the communication process such as small talk, being able to identify the body language and emotions of other people are often challenging. All of these skills are things that we believe can be learned but the default position is that they are very difficult.

Doctors are reluctant to make an official diagnosis, due to miseducation or a preference to try and identify the most prominent symptoms. We get many emails from people who are frustrated that their doctors won’t recognize their condition, while our questionnaire is great we do recommend that people seek out an official diagnosis. Because of the complications involved we made this post which should help in the process

What Would Einstein Say About Autism Today?

We are giving away our book: Emotional Mastery For Adults With Aspergers