Leo Kanner was the first person to describe the nature of Autism and its symptoms almost sixty years ago.  Later, Hans Asperger wrote about a condition, which was first termed autistic psychopathology and is now known as Asperger’s Syndrome. Though there were similarities in the two discoveries, Asperger claimed that his disorder was not a variation of the initial Autism discovery.

According to the most widely used diagnostic tool, DSM-IV-TR (Diagnostic and Statistical Manual of Mental Disorders), both disorders are classified as Pervasive Developmental Disorders. Since 1994 Asperger syndrome was added to the fourth edition as a separate disorder.

Today the debate continues among academic researchers that Autism and Aspergers are in fact, two independent conditions, although Asperger’s Syndrome had been incorporated under the umbrella of Autism to overcome clinical confusion between the diagnoses of these syndromes.

These differences are based on the different language and cognitive challenges that those with Autism and AS face.

Individuals with more severe forms of autism are more likely to show symptoms of limited communication skills, both verbal and non-verbal.

Autism can be detected early, usually at the age of five, while those with AS often remain undiagnosed until eleven years old. The late onset of complex social-skills explain how and why people with AS are diagnosed later than their counterparts with autism.

Studies conducted at Monash University conclude that children with Autism portray a particular style of walking, this will be fundamental in the diagnosis of Autism as children learn to walk before they develop social skills.

Children with autism have limited interest in events, items and the people in their environment. They tend to favour repeated actions. Children with AS are less likely to show delays in age appropriate skills, such as self-help, curiosity and the ability to adapt.

Autistic children, in many instances, are characterized by having motor difficulties and tend to be preoccupied with parts of objects such as the wheels of a toy car;  their limited and circumscribed interest consumes a great deal of their time. Individuals with AS are less likely to display these symptoms.

Children with autism usually have cognitive delays from early infancy. Children with AS do not tend to show this kind of delay; they might be quite talented in numeric abilities, learning to read, and being constructive in memory games. 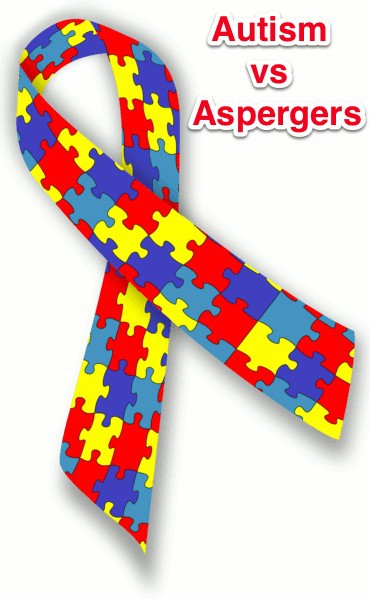 Autism and high functioning autism (HFA) have several common characteristics with Asperger syndrome (AS). AS and HFA individuals have normal cognitive abilities and do not experience any significant delay in acquiring language skills.

Autism and Asperger syndrome are similar in terms of their inability to create and maintain social relationships. The verbal expression of an individual with autism might be limited or even non-existent although certain characteristics can also be observed by individuals with Asperger syndrome.  Despite their developed vocabulary and normal intelligence they are unable to socialize in an acceptable manner.  Their speech is overly formal and/ or too literal. During interactions with peers their behavior is deemed socially and emotionally inappropriate; this is also true for individuals with autism. They possess similar traits in their inability to understand nonverbal signs and gestures.

Both individuals with autism and Asperger syndrome have a similar behavioral profile; hence the same treatment methods can be effective for both groups. This is why some clinicians and researchers suggest that it is inappropriate to talk about two separate conditions or different disorders. A dimensional rather than a categorical view of autism and Asperger Syndrome seems to be more reasonable.

Differences in Degrees of Sociability

Delays and disturbances of communication are more explicit in autism. Individuals with Asperger syndrome might be able to successfully complete school or find a job, which is unlikely for individuals with autism. People with AS will experience significant impairment in important areas of functioning, for example, social interactions or correct occupational behavior.

Important factors in their Differences

The main worry in defining Asperger’s as a lesser form of Autism is that it could imply that children with AS do not face as many difficulties as those with Autism, where in fact, they can suffer far more severe anxiety disorders and depression that those with Autism.

Another important factor is that those diagnosed with Asperger’s give parents guidelines to assist their children to developing fulfilling social activities and a chance to lead successful career options.

Due to deeper understanding of these disorders, such as the brain cell suppression in HFA which is not present in those with AS, resulting in variants in diagnostic tests and subsequent treatments, sufferers of both syndromes can be diagnosed and treated with the most appropriate methods. With ongoing studies into the psychological and brain differences between these syndromes, it will aid the future development of diagnostic tools and subsequent treatments for each disorder.

Telling someone they have Aspergers Syndrome

Making friends when you have Asperger’s and Autism