Is Autism Hereditary? What is the link between Autism and Genetics?

This is the first of a sequence of posts that will discuss the causes of Autism. We will start with one of the questions parents often ask themselves “Is Autism Hereditary”?

Before I start I want to address this post with a word of caution, that everybody’s Autism is different. By different I mean they have slightly different symptoms, different signs of Sensory Processing Issues and different ways of functioning. No two people with Autism are the same and I suspect that it may also be very difficult to identify one specific cause.  The Autism Spectrum is a fairly new idea in the field of behavioural psychology, but one thing is clear; not all autistic children and adults behave in the same way; rather, they act according to their personal position on the spectrum, which may or may not change with time.

The Autism Spectrum encapsulates all kinds of subtypes, including Asperger’s, Pervasive Development Disorder (PDD-Nos) and Rett’s Disorder. People on the spectrum can be either high or low functioning which effects their ability to copy in the world.

The genetic root of Autism has been the subject of numerous studies and scientific curiosity, and has yielded many answers, which have helped the understanding of autism worldwide. And while it isn’t as simple as saying, that the only cause of Autism is genetics passed on by the parent’s or grandparents it is fair to say that Autism definitely has an element in some cases, which is hereditary. 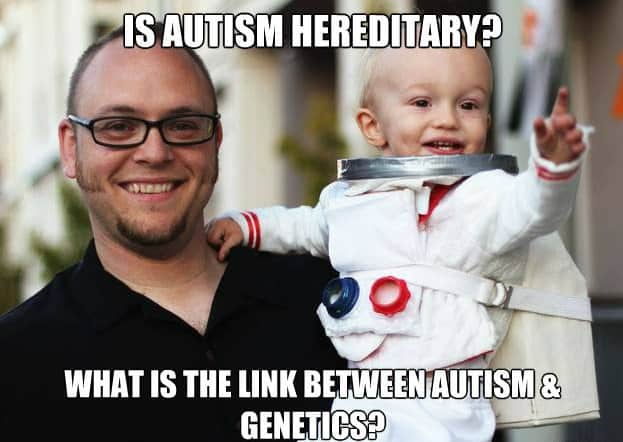 What is the link between Autism and Genetics?

Genetics is a complex field, and while new discoveries are being made every day, there is still much that remains to be found out. Autism is a complex condition and genes that trigger its onset are even more so. Within the study of a genetic cause to identify hereditary sources it had been found that no specific gene that the scientific community is aware of actually causes autism. Rather, it is a group of genes, many of which may or may not mutate or alter during early development to create the behaviour patterns, which make an autistic child different from their peers. It is estimated that 400 to 1,000 genes are involved in the in the neurological issues that are involved in Autism. Autism in children can result from gene mutation, recessive genomes being expressed, or even viruses damaging the genetic makeup of a foetus or infant. The Mount Sinai School of medicine offers a new blood test that looks at 30 genes that looks for mutations that are associated with Autism.

While the exact studies of genetics have failed to prove conclusively a hereditary cause of Autism, there have been other studies, which indirectly prove a link with genes carried by the parents. In recent research performed by Simon Baron-Cohen (professor at the Autism Research Institute in Cambridge), there seems to be a higher a probability that parents who are scientists and engineers are more likely to have children that are Autistic. This logical thinking that element that makes a good scientist seems to propagate down to their children in the form of Autism. Baron-Cohen had been known to illustrate that there are particularly high concentrations of Autism in children around such areas as Silicon Valley, which is renowned for being a hot spot of innovation.

Autism is a condition that comes with it the ability to think in a way that can analyse, understand and systemize complex problems. This is why the natural employment path for people with Autism is to work in a field that supports that mind-set such as engineering, science and increasingly computer science.

In the research performed by Baron-Cohen it was discovered that the fathers of Autistic children were more than twice as likely to be engineers as were fathers of non-autistic children. It appears that the gene responsible for systemizing seems to be passed down through the generations.

Similar studies carried out by Dr John Constantino indicated that the parents with more autistic type traits tend to attract each other somehow and are then subsequently likely to have a child that is autistic. In Silicon Valley this is particularly true with the geek mind-set being very much prominent and subsequently leading to like minded people attracting each other romantically. If a couple have two children that have Autism there is a 35% probability that the third child will have Autism too.

As we mentioned at the beginning of the post, it’s important not to get to hung up in causes. There are many potential ones and we will explore these in future posts. For parents, the potential hereditary nature of their child’s Autism is not a reason to give themselves a hard time.

Ok, over to you guys, we’d really like to know what you think, please leave us a comment below with your thoughts.

Autism in the Middle of the COVID-19 Pandemic

Autism and Relationships Part 2 – when both people have autism

Autism and Relationships, Part One — Autistic people and neuro-typical people