We recently discovered this Aspergers Checklist which gives a good level of detail into diagnosis of Aspergers. One of the interesting things it mentions is that Aspergers Syndrome is particularly difficult to diagnose in younger children and toddlers. It includes a number of factors which would not normally be used in the diagnosis of adults but can be used in children due to the lack of visibility of other symptoms ( behavioral and personality symptoms).

As well as the above physical tests there are also the traditional behavioral checklist which can refer to such as looking for these characteristics: 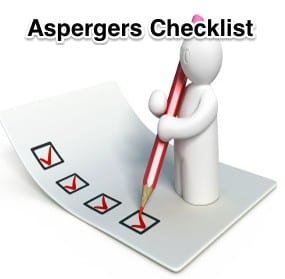 Attachment to routines, often cause disturbances if changed. Someone with Aspergers is generally not very adaptable to change.

Difficulties in developing close friendships, having meaningful or deep conversations as well as tendency to isolate.

Talking about a subject obsessively as well as well as  lack of eye contact during the conversation are big tell tale signs of AS.

This can be observed in the engagement of repetitive rituals such as body movements, habits and behaviors. Examples of this include hand flapping, twirling or obscure methods of play.

There is a delay or impairment of motor skills such as playing catch, riding a bike, tying shoelaces. Although not exclusive to AS this can often be an effect of the disorder. Often clumsiness or the inability to realize the boundaries of ones bodies.

Although this is not an in depth Aspergers checklist it does give a few major points to look for. If you are looking for a more rigid tool for diagnosis you might want to check out the Asperger Test developed by Simon Baron-Cohen.