I remember the first time I ever told a manager I had Asperger’s Syndrome.  It took every ounce of courage I had.  We sat, in a room, together, being very pleasant to one another.  I was desperate for her to know that I had this thing called Asperger’s Syndrome, which was, only then (early 2000s) coming into the public eye; for her to know how this would affect my carrying out of my duties.  I waited until the end of the meeting and then told her.  She asked a question that caught me off-guard.

“Is this syndrome going to get any worse?”

I didn’t say no but I forget what I did say after all that.  I got to grips with the basic job description.  It seemed like a job I could do.  When I got (I was still very young) hold of a new idea or a new responsibility, I was full of enthusiasm.  It’s funny, but seeing those words appear on a page fifteen years or more after the actual event, it feels just like yesterday. 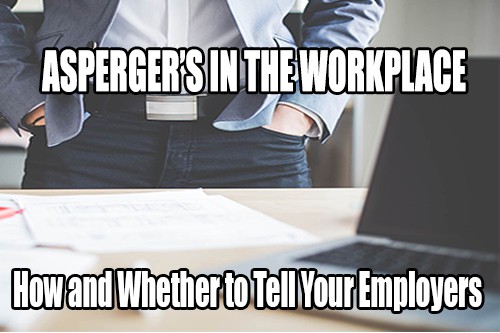 It is important, rather than locking Asperger’s Syndrome away, you take a more sober view and ask yourself, who actually needs to know?  Going by my own past experience, it is not something that can ever (nor should ever) be rushed, but it is something definitely worth doing.

I recently changed jobs.  This has brought out one of my key strengths as an Aspie.  I need to focus on one single thing at a time.  When my mind is fully on task, I can really get to grips with it.  There was a new part of my job which had just started to cause me a little difficulty.  Therefore, I had been a little more apprehensive and tentative when I had approached it.

I’d also recently made some oblique references to having “learning” difficulties and I thought it only fair to follow up on those.  My manager needed to know.  She may well be the one left wondering, at some point, why I was not picking up on things in the way others were.

I spent a lot of time thinking about how to broach the subject with her.  Should I wait and see if she says anything, about any problem or issue, since the slight change in my duties and how I had been performing them?  No, I decided that would make it sound like I was defending myself.  So then, I waited for the moment to present itself.

Despite what parents, siblings, guardians and carers may wish to believe, our having Asperger’s will affect the way we behave in, and cope with, the workplace.

Don’t tell anyone you’ve got Asperger Syndrome will, rather than protecting the Aspie, make them feel even more isolated and unsure of themselves.  You may well think you are acting with their best interests at heart, but what you will be doing instead will be driving them further into their shell.  We Aspies, and particularly myself, at the age I am writing about (I was 23), may appear confident and well-presented on the outside, but underneath we are still either teased or plagued by doubts about whether we’ve done the right thing.  Have we said the right thing?  Are we acting in an appropriate manner?

We will have made mistakes in the past and, no doubt, been given a “talking to” about the ways in which we have behaved.  By drilling into the Aspie the message don’t tell anyone, what you will be doing, rather than making them more careful, will be to make them more conscious of their own shortcomings, which will increase tensions within them, make them more withdrawn, more antisocial and much more liable to be a target for bullying in the workplace, being passed over for promotions etc. in the workplace or, in many cases, both.  If you learn how to handle telling your employers that you have Asperger’s Syndrome, as stressful and as awkward as this may make you feel, at the beginning, this will, in the long term, increase your own self-confidence and your awareness of what your own strengths and developmental needs are.  This will help you present yourself better as an attractive employee to companies.

You will have doubts along the way.  You will tell the wrong people along the way the wrong things and feel like, on certain days, you have gone backwards and made absolutely no progress.  It’s normal to feel this way.  The important thing is to recognise that this is happening and to deal with your feelings.

So, what purpose is served by telling?  How could AS be perceived as a benefit?  Have there been any concerns raised?  The purpose served by telling is that one’s manager (or even, in certain cases, one’s colleagues) will be less likely to assume that you are just being lazy or thoughtless.  You want them to get to know the real you, and Asperger’s Syndrome is part of who you are.

The decision of whether to tell or not should always be a very personal one, steered by you, the Aspie.  It is therefore, I feel, worth considering, briefly, how not to do it.  Remember, there are still many people out there who have never heard of Asperger’s Syndrome.  They will, therefore, possibly have no idea what you are talking about.

You should not sound like you are attempting to justify or defend yourself.  Do not, for example, say, “You know when I did such-and-such?  That was because I have this thing called Asperger’s Syndrome”.  This is likely to cause you more problems.

Maybe wait for the other person to give you an unknowing cue.  My manager (in this case in my most recent one-to-one), mentioned to me she could see I liked routine and repetition.  My answer to that was, yes, this is because I have a condition known as Asperger’s Syndrome, which means I learn best when I am focusing on one thing at a time.  This then led on to a discussion on my strengths and how they could be used.  It also led her to ask one very important question:

I was able to show my manager that I had thought through clearly telling her and also what my reasons were for doing so.  This has since meant that she has got me sitting with people who have strengths where I have weaknesses; I have been able to pick up several things by rote that I may have otherwise missed out on.  I will, here, relay a few snippets of that conversation:

Me: “Yes, I find that it really helps me to focus.  This is because (and this is something I’ve been thinking about telling you for a while) I have a condition known as Asperger’s Syndrome — a set routine in front of me really helps, where I know, maybe not to the exact letter but at least in the basic structure, what is going to happen next and what is expected of me.  That helps my confidence and helps me help the customer.”

Manager: “Ah, right, I know you’d mentioned learning difficulties in passing before.  So how can I help you?”

Me: “Well, I’d find it useful to listen in again to more of the sales calls of others, take note of what works for them.”

Now, contrast the above with another experience, from just over fifteen years ago.  I was 22, still trying to get on with everybody, not let anyone know I had Asperger’s Syndrome, for fear they would see it as a sign of weakness.  There was some information that had been given out incorrectly.  This had happened previously.  I’d thought I had done everything I was supposed to do.  I had followed whatever instructions I had been given.  I was too frightened to ask for help, because the help I got normally came in the form of:

The mistakes kept on happening.  This all came to a head one day in late 2000, when my managers called me in for a meeting:

Manager: “Now, Robert, we’ve called you in because there’s been a couple of occasions recently where you’ve been asked to do one thing and done exactly the opposite.”

I had mentioned in passing to the deputy manager of the team that I had Asperger’s Syndrome.  I think it came out in conversation, somehow, that his daughter had it.  I must have given some sign I knew what he was talking about.  He’d said something like, “How do you know about it?  Have you got it?”

That was as far, then, as the conversation had gone.  Then, in this meeting, the deputy manager carried on:

“You’ve also had a couple of episodes recently where you’ve not appeared to know where you are.”

I did not know, then, that those are attacks, which may be familiar to some of you, where you get so stressed out, your brain and body just shut down completely.  I just believed that I had to keep my Asperger’s Syndrome to myself, because people would think I was being stupid.

Then, the decision was taken for me.  The deputy manager, with (probably) all the best intentions, mentioned that I had told him I had Asperger’s Syndrome.  I liked the deputy manager a lot but it took me a long time to forgive him for that, because now my manager knew.  I just wish I had been given the chance to tell him.

The difference between the two scenarios is illustrative.  From my own perspective, it has shown me how much I have learned and matured.  In the earlier scenario, my managers had to get me to explain to them why I could not do things “properly”.  This, then, put me on the back foot.  I was very naïve and immature, I now realise, in the way I came across, saying sorry even when I felt, deep down, what had happened wasn’t really my fault.

So then, what have I learned from these two experiences?  I have learned not to be ashamed or embarrassed about having Asperger’s Syndrome.  This is important, because it means I am now more confident in myself.  I know how to focus more and not make excuses for my own behaviour.  I have also learned to focus on my strengths; if people can see you are sure in what you are doing, people will respect you more.  You will also be less of a target for bullying.

Being careful whom you tell is completely different to not telling anyone at all.  In short, spend some time weighing up your options.  Who needs to know and why do they need to know?  I can hear parents, friends or siblings reading this and saying, No!  Just don’t tell anyone!  That’s the best way!  To them I say: re-read this whole article.  Consider the following factors:

Remember, you will make mistakes along the way and that’s ok.  No one should blame you for having Asperger’s Syndrome.  If they do, then that is their issue, not yours.  Always remember that.

Autism in the Middle of the COVID-19 Pandemic

An Aspie’s Adventures In The Workplace

Preparation for the workplace

Founder of the Aspergers Test Site, author of "Emotional Mastery for Adults with Aspergers" and "An Introduction to Aspergers Syndrome". The website was setup in 2012 to give people access to valuable resources pre and post diagnosis